Most mornings I wake to ponder the day ahead and think to myself nothing will happen that I have not seen at some point before.  Most often that statement rings true, however a couple of days ago as I stood in line at TSA pre screening in SEATAC airport I saw something I had never ever seen in the past.

There stood a man two in front of me with a form of carry-on luggage of which the likes was unique to say the very least.  This man who I will refer to hence forth as Cleatus stood well over six feet and was attired in contrasting plaid and camouflage.  His singular proud tooth could be seen from space as it jutted at a right angle from his slack jawed mouth.

Cleatus stood shouldering an overstuffed pillow case with what a young man about his local area would need for a holiday away.  I only know this because Cleatus’s pillow case had seen better days and was quite near the point of translucence.

I am quite sure that this may have also been a first for TSA as well because Officer Yolanda was a little put out by the contents of the pillow case that had fallen out as it made it’s way through the x-ray machine.  I had forgot to mention earlier that Cleatus did not have any string around the top of his case to keep it closed in transit.  In fact, I have to think that this may have been the first time Cletus may have ever been in transit.

Some minutes later Cleatus left on his way and we had gone on ours.  We arrived at Gate S8 in time to board our Delta Flight to Amsterdam.  I usually have no trouble finding several humorous tid bits to comment on when flying transatlantically. I am happy (or am I?) to report that this journey was without folly.  Our on board staff were crackerjack and our seats were comfortable.  Our menu was fabulous and the choices were grand.  This is the first time I have flown internationally with Delta and I am very happy to say I hope it is not my last.  The service and attention to detail is excellent.

I suppose I could natter on about the 60 something couple in front of us.  I would have happily spent time in a Turkish prison to cheerfully murder both for their in-flight antics but that is a whole other story and I want to keep this one slanted towards puppies, cotton candy and unicorns. 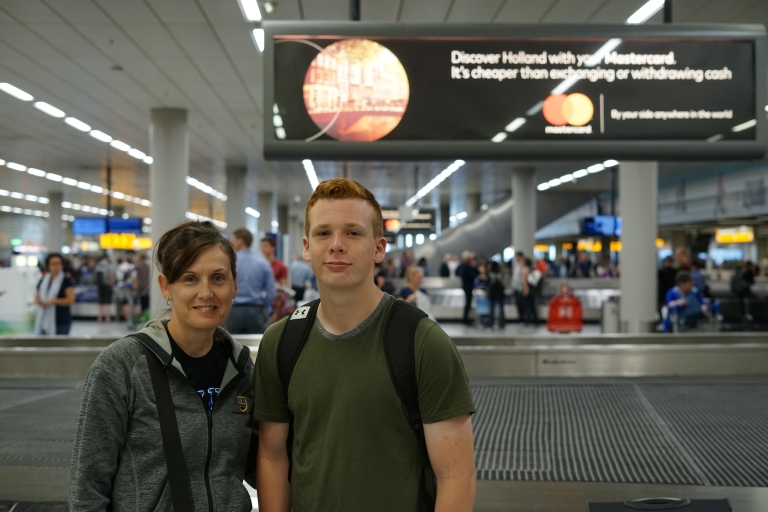 We landed in Holland nine and half hours later feeling good and ready to attack the day.  Our first stop was at Enterprise to pick up our rental for the next month and we sat second in line for service.  As luck would have it our attendant from Ghana as I would later find out was named Godwin.  Godwin was happy and smiley and I liked him immediately. As we all know Godwin was about to fleece the shit out of me in the upsell game.

Sure we booked with Costco Travel and as such got a smoking price on a Fiat Panda “or similar”.  Now, as per usual the “or similar” was considerably smaller than a Panda and Godwin warned us about the cramped quarters and restrictive space for our luggage thank god.

Just ten minutes later, under a Ghanaian voodoo spell we left Schipol Airport.  I am at the wheel of a brand new Volvo XC60 with only 1100 km on it and we were rocketing south of Amsterdam with Antwerp in our sights (what do I know about Diamonds) & Godwin saved the day.

Several hours later and we found our way to Passendale in southern Belgium. This town holds a special place in my heart. I recently watched my eldest son parade here with the contingent of Canadian soldiers paying their respects to those who fought before them. The picture above is a part of a memorial commemorating 100 years since those brave Canadian lads pushed forward from the area of that gate to the church in the distance. 16000 Canadian casualties and ten days of wading in waiste deep mud to capture the town. Canada should always remember the bravery and sheer determination of our military heroes.   Today our pathetic prime minister minimizes spending on our military and wastes those dearly needed funds on legalizing marijuana. So there you have it. A PM who wishes for Canadians to have unfettered access to hallucinogenic drugs. So god help us.  Bust out the Oreos Mr PM, you can watch our military do their duty with vintage equipment safely from 24 Sussex after an epic game of C.O.D. and a Rebagliati .

Later we went to Vimy in France.  Allistair and Deanna were filled with Canadian WWI history and we were comfortably checked in to our hotel in Amiens.  Timing is everything and in this case as we flopped into bed the TV went on and there was England trying desperately to clutch defeat from the jaws of victory as Columbia netted one in injury time to tie it up 1-1.  Certain things are like death and taxes and one of those is England losing games on penalty kicks.  Surprise, shock, awe etc etc.  Jordan Pickford stood on his head and as the The Sun Newspaper quoted in its next days front page headline, “The hand of Jord” saved the day and England lives on to meet Sweden in the quarter final.

The following morning in Amiens our breakfast was lovely and we bid farewell to our comfortable beds and our pleasant hoteliers as we boarded Sven and drove southwest to Juno Beach and the Canadian Exhibit. I have been interested in the D-Day landings since learning of them as a lad.  I have had the pleasure of visiting Dunkirk but this was the first time I had been lucky enough to visit the area Canadian soldiers fought bravely to liberate on that fateful day.  We wandered the museum and took in two films based on the experience to later stroll the beach itsself.  It is truly an ominous feeling to walk along the beach in the Canadian soldiers footsteps.

We left Juno the richer for the experience and set our sights for Provence and our ultimate destination.  We were never going to make the whole journey in one go, so around mid afternoon Allistair  started to work the Hotels.com app for places along our route that were affordable and quiet.

We were not disappointed but our hosts were truly surprised as I ran from our car in a deluge that I have never experienced the likes of before.  The rain hurt it was coming down so hard.  I got to the door and I was met by a couple that have recently opened their 300 year old farmhouse on 4 hectares to guests.  They were a young Dutch couple with two kids that we later learned over Heineken had moved to Normandy to escape the rat race in Holland.  We sat at their kitchen table and chatted until midnight as we learned about the area and they learned about Vancouver Island.  We slept like babies and woke to the smell of fresh baked bread and croissants with pots of apricot and lavender jam.  Thanks Hotels.com! Thanks Le Rianon

Back in Sven around 9 and we drove 5 Kms to Boussac to fill his tank and to wander about on market day.  An awesome morning and then we settled into our drive south to Bonnieux in the Luberon valley of Provence.  The weather has averaged 35c since our arrival and we are happily tucked away in a beautiful French Provençal home for the next two weeks.  Thanks AirBnB!  We are now temporary members of the local Tennis Club and can’t  wait to make ourselves more at home.

Thanks so much Godwin. You are a star. Stand by for more adventure… 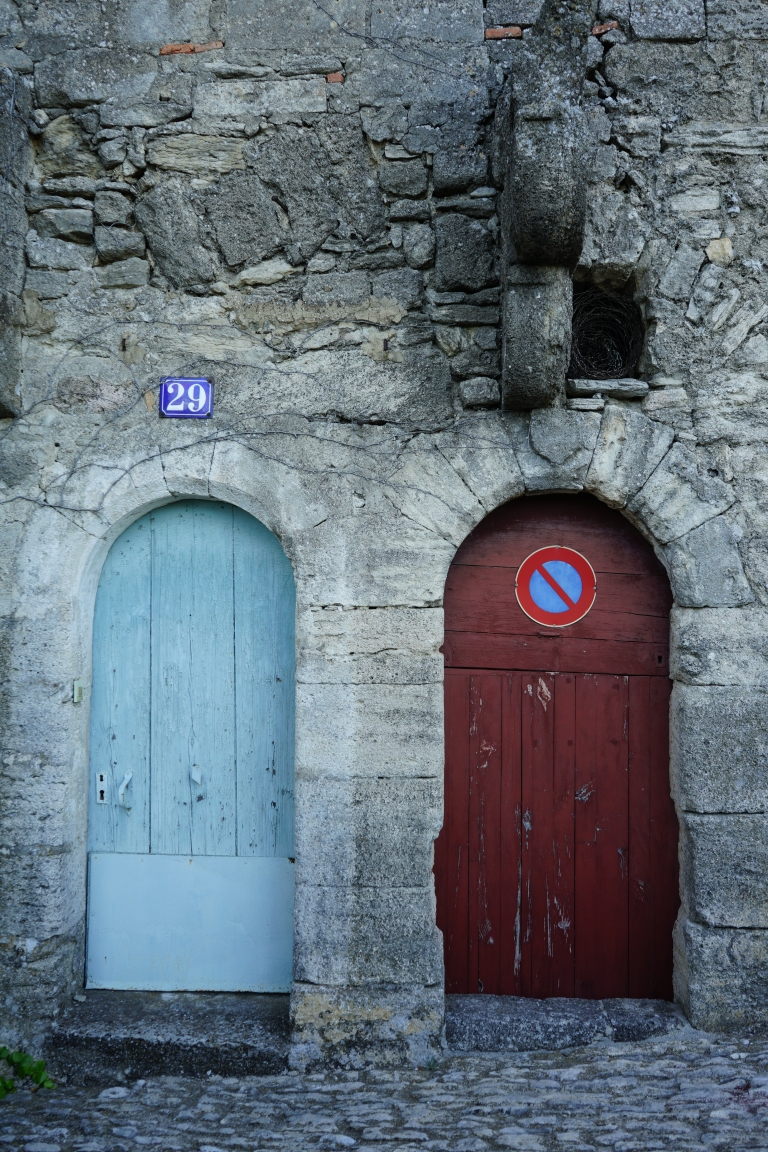 3 thoughts on “WE HAVE ALL SEEN THINGS.”